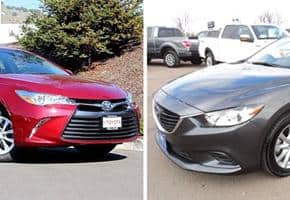 The Mazda 6's quiet but surprising acceleration is starting a tense and exciting competition with its stalwart rival, the Toyota Camry, in the Vietnamese auto market. 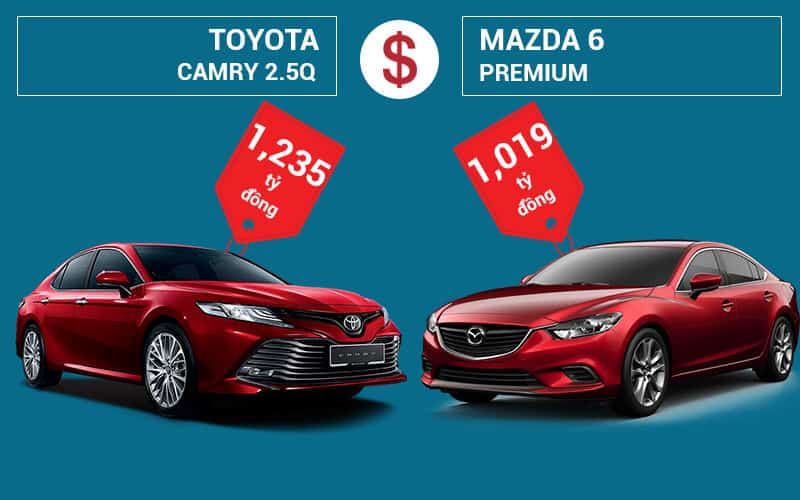 In the country of cherry blossoms, the birthplace of many leading car brands in the world, Mazda is not a completely competitor to the "big" Toyota but Nissan.

But outside of Japan, Mazda seems to be a name that brings many interesting things when Toyota wins market share.

In the Vietnamese market, Mazda is the latecomer, after a lot, even when Toyota has made the wind on almost every passenger car product segment. But not so that the difference between these two compatriot brands can remain forever. Mazda6 is a typical example.

For the past two decades, the Toyota Camry has been considered a "unique loner" in the mid-sized sedan segment. In almost every phase, whether it is peace or turbulence of the market, Camry alone often "accept" the remaining competitors if only in terms of sales volume.

In the year of 2014 alone, the year was more or less quiet for Camry, according to statistics of the Vietnam Automobile Manufacturers Association (VAMA), this model also reached the total sales volume of 4.685 units, too far. Compared to all other names in the same class and right with the model in question is Mazda6.

Of course, the "more than lose" in production does not completely reflect fully on product quality, especially in the car market which has quite a lot of differences like Vietnam. Because, many of Camry's rival models are still highly appreciated in the global market. Even in Vietnam, models such as Ford Mondeo, Honda Accord, Hyundai Sonata or Nissan Teana have also made many efforts in many different aspects.

Meanwhile, Mazda6 is clearly a "rookie".

This model was officially introduced in Vietnam market in mid-May of 12 / 2012. And so, it can be considered that Mazda6 has only officially joined the playground since the year 2013. The appearance of Mazda6 is not much to say, especially when the manufacturing and distribution unit, Thaco (Truong Hai), is also noisy in marketing and sales policies.

On the one hand, in terms of design and technology, even though it is appreciated but said to be completely breakthrough, Mazda6 has not reached. Of course, consumers are very smart for each of their options. When ranked next to "compatriot" Camry, must admit that Mazda6 has many points to fair competition.

+ Note: Learn 3 Types of Electric Cars Available on the Market

He went up, he stopped

With the mysterious silence, Mazda6 has made few people pay attention to the stage with moderate speed but very persistent. Note that Mazda6 has had a whole year of 2013 dive in extremely modest production.

But when looking at the rise of the Mazda6 in the last year of the 2014, many people will be startled by the prospect that soon the position of the Camry's number of 1 will be completely challenged.

Leaving the "hidden" stage of the 2013, Mazda6 kicks off the year of 2014 with the monthly sales volume of 1 with only a minimum of 32 units, a really small number, especially when compared to the 519 units sold in the same period. of Toyota Camry. Until the month of 6 / 2014, the output of Mazda6 only inched up to the number of 40 units.

However, since the month of 7 / 2014, sales of Mazda6 have started to accelerate, from the number of 69 units climbing one circuit to 204 units in the last month of the year. And by the month of 1 / 2015, the sales volume of this model reached the number of 244 units, accordingly, for the first time officially surpassed rival Camry.

Even when accumulated in the first two months of this year, the total sales volume of Mazda6 has surpassed the Camry, namely 415 units compared to 332 units.

It is worth noting that in the month of 7 / 2014, the retail price of Mazda6 has been deeply reduced by the distributor to VND 111 million for the equipped version of the 2.5 liter engine and the reduction of 126 million VND for the 2.0 liter engine version, down to VND 1,159 billion and VND 998 million, respectively. This is also the time when sales of Mazda6 really accelerated.

By the beginning of this year, the retail price of Mazda6 has continued to decrease further from VND 48-58 million depending on the version.

In the Vietnamese automobile market, selling price is always a significant factor affecting purchasing decisions of majority of consumers. Therefore, with the advantage of price though not much, Mazda6 is clearly chosen by many consumers, especially those customers whose average age is younger than the traditional customer group of Camry.

One more detail that needs to be mentioned is that the year 2014 is the final stage of an upgraded Camry version. Therefore, from the car manufacturer with the largest market share in Vietnam to consumers, the delay to wait for a new version is expected to be launched in the middle of this year is completely understandable. It can also be considered as another reason for the trend of decreasing sales volume of Camry from the beginning of the year to the end of the year 2014 while sales volume of Mazda6 increased.

The one who went up and stopped was the same thing that helped these two compatriots meet in a competition that is considered the most stressful and interesting in the Vietnamese auto market.

At this time, Mazda6 has surpassed Camry in sales. But not so that automatically considered Mazda6 as the dominant. As mentioned above, Camry is preparing to have a new version, and until then can be more aware that those two models are better competitive.

You are viewing the article Mazda6 and Camry: "Rookie" Fighting "Lonely Lonely" in the category news of Thanh Phong Auto. You can follow more good articles of Thanh Phong at Blog Share.